Children across the globe are being denied the opportunity to learn and survive simply because of who they are or where they live. 400 million children from ethnic and religious groups are discriminated against according to our estimations. 720 million women alive today were married before they were 18 – compared with 156 million men. 1 in 4 refugee children of secondary age are estimated to be in school compared with 3 in 4 children worldwide. There's a 3–4 times greater likelihood that children with disabilities will experience physical and sexual violence and neglect than their peers.

We're calling on world leaders to ensure #EveryLastChild survives, learns and is protected!

With all the resources at our fingertips in terms of renewable energy sources, a 100% renewable energy campaign seeks governments in the region to begin immediate corrective action through projects that cover peak energy demand and help access to the population without investing in distributor generation projects Of energy outside the network, and in turn supports increased jobs in renewable energy. Through media campaigns and awareness campaigns and gaining support in more than one Arab country.

The global energy sector is changing dynamically and renewable energy has become a trend in many countries. The Middle East and North Africa need to adopt this innovation in clean energy and keep pace with the rest of the world by switching to a clean energy future. The global expansion of renewable energy has led to a significant reduction in costs, so solar PV and wind power are now competing for new coal in most regions, Despite a global subsidy system for fossil fuels, which receives an annual subsidy of US $ 550 billion, more than double the support for renewable energy sources, according to the International Energy Agency. Even with oil prices falling by 45% in 2014, solar energy remains competitive in the region. In the Middle East and North Africa, however, fossil fuels continue to be the main source of energy supply for electricity generation. Fossil fuel subsidies also play an important role in the region in stopping any real effort to invest in clean energy alternatives.

While carbon dioxide emissions in the Middle East will double between 2012 and 2050 if the situation remains the same, these emissions will fall from 1670 million tonnes in 2012 to 294 million tonnes in 2050 under the energy revolution scenario. By 2050, CO2 emissions in the region are supposed to be 47 percent below 1990 levels, while energy consumption would be completely carbon-free in the advanced scenario. 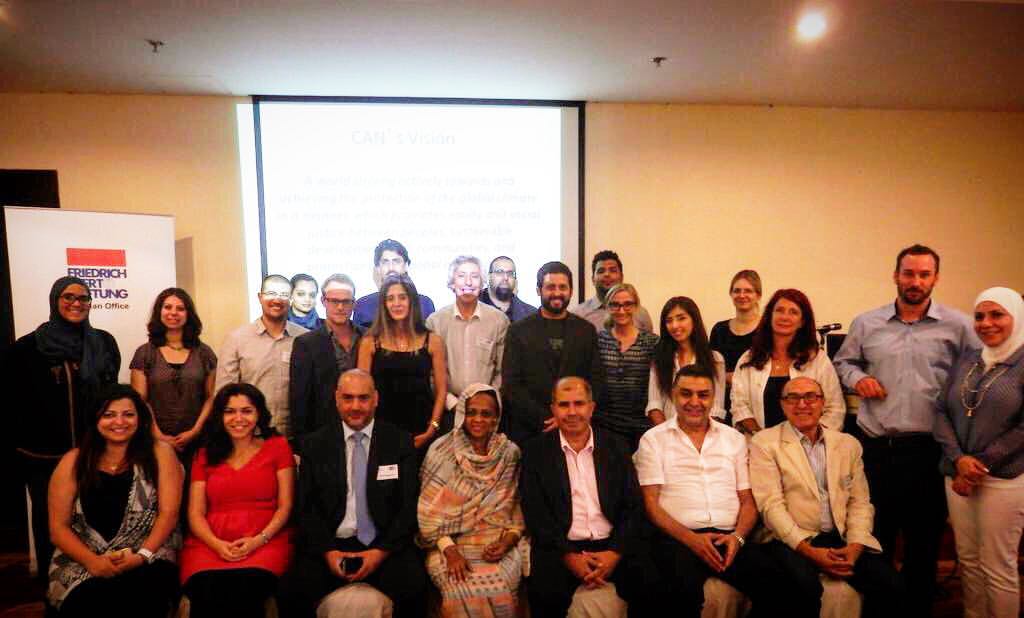 The network includes more than 100 environmental associations from around the Arab world. The network was formed in a workshop in Amman hosted by IndyACT and the Friedrich Ebert Foundation, where 30 representatives of civil society organizations met to discuss how To make more effective use of their resources to achieve common objectives. The workshop was the culmination of a series of meetings that began in the Moroccan capital of Rabat in 2013. The creation of the network is also meant to enable civil society groups that are geographically distant to share knowledge and collaborate in areas of mutual interest and progress in the renewable energy program.

Ultimately, the goal is to strengthen their capacities to effectively push and move policies to change prevailing ideas for a strong achievement in the climate work that is expected to be agreed during the climate negotiations in Paris by the end of this year. In addition, the network paves the way for the effective participation of civil society organizations in COP22, which will be held in Morocco next year. 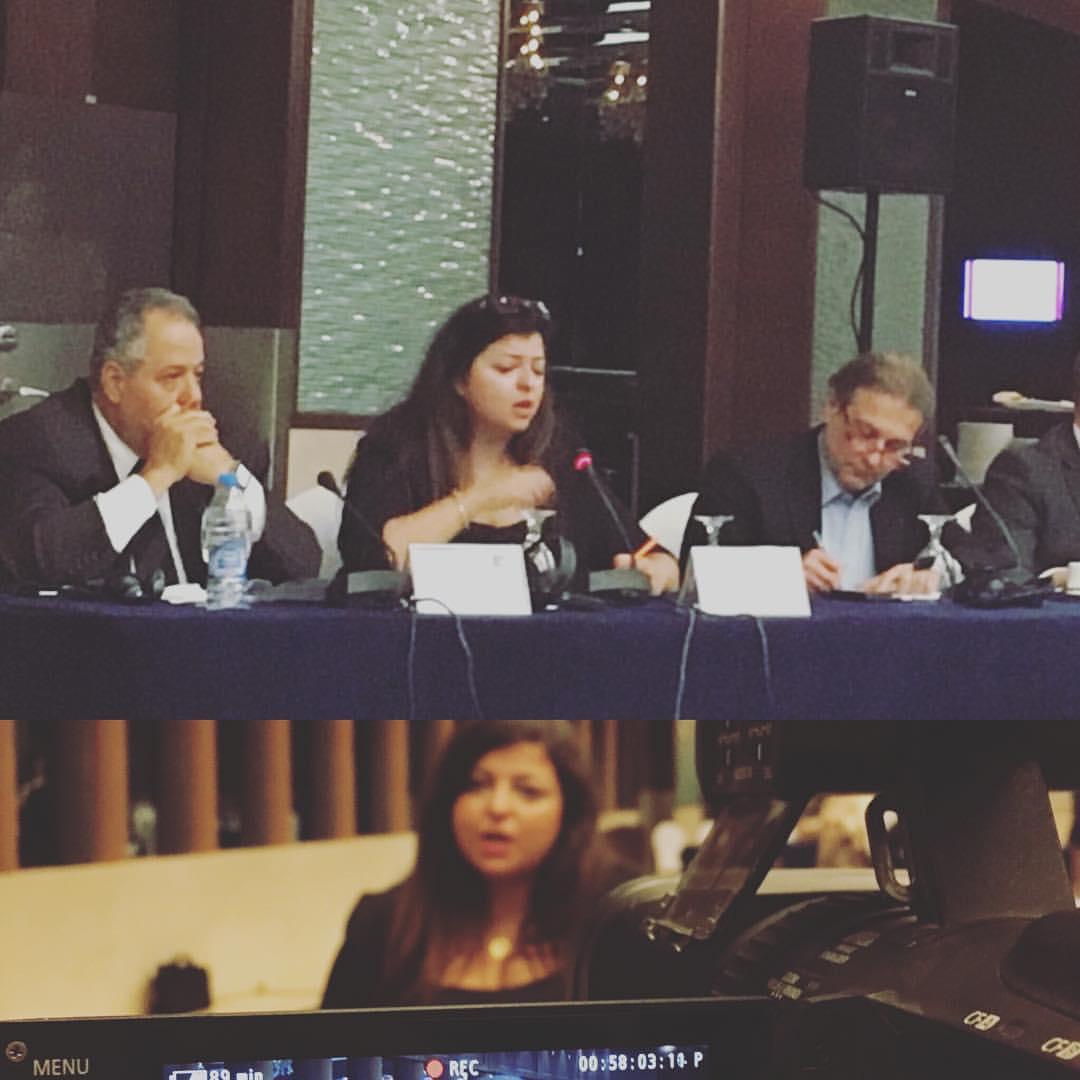 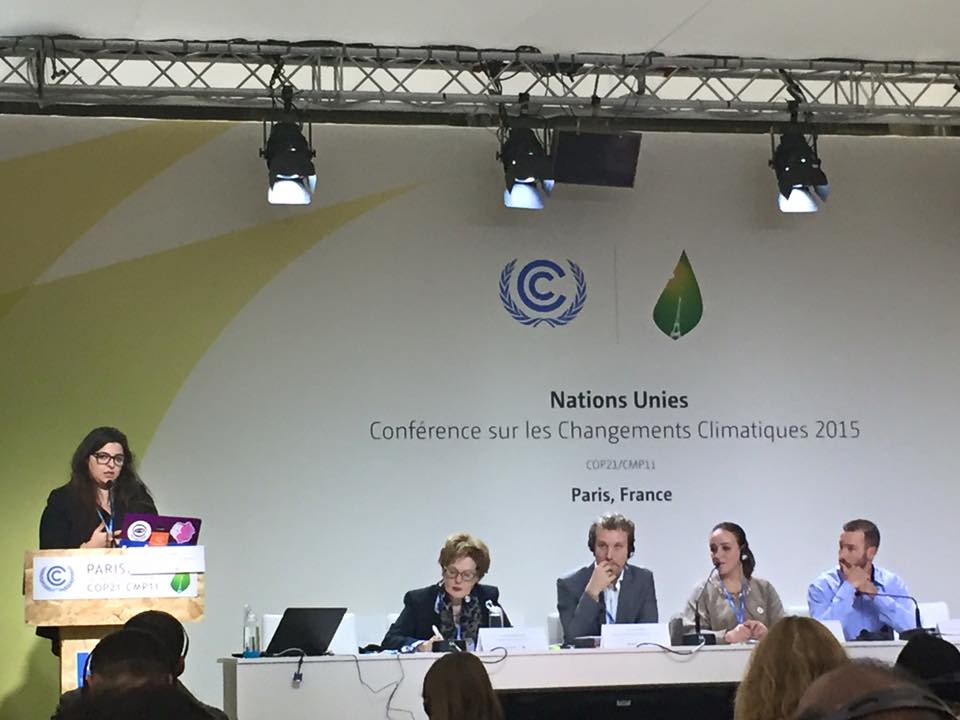 I can proudly say that i contributed in the post fossil fuels era, the past 5 years since UNFCCC session in Copenhagen i got heavily involved in the UNFCCC as an observer, campaigner and an advocate. Working 24/7 to make sure that the Arab group in specific sign and approve an ambitious deal in Paris.

From Durban to Doha to Lima followed by tens of sessions between i got involved in high level advocacy and became the regional advisor for many NGOs.

In 2015 i fully joined indyACT as the head of their climate & energy campaign in the Arab region with a clear objective of advocating and campaigning to achieve an ambitious deal in Paris, COP21.

Through our the COP itself and during the year before it i worked day and night to achieve this goal with a high level advocacy campaign and very strong media campaign that reached the financial times with an add asking Saudi Arabia to stand behind the most vulnrable countries.

Through COP21 the Arab group was the main blocker of the ambitious agreement , Saudi Arabia is doing its best to stop this agreement from happening dragging the whole region behind it. Through out the intensive two weeks negotiations my campaign succeeded and I made the Arab group agree on the terms of the final COP outcomes . 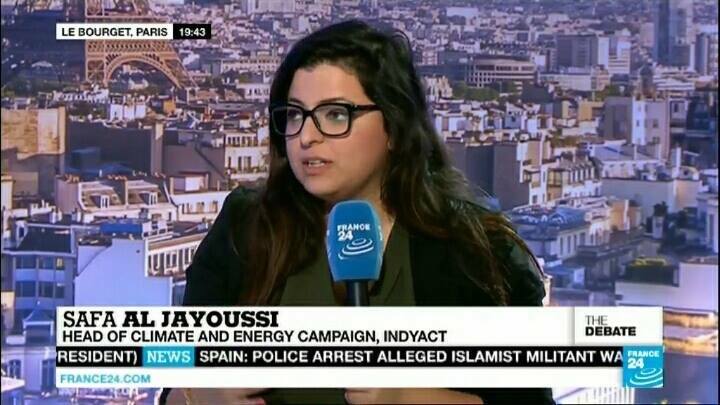 Bergesh forests faced cutting down to pave the way for building a military academy in one of Jordan’s shrinking forests, Bergesh forests is more 500 Years old faced an attack against its environmental legacy in 2014 .
The reason behind this massacre is becuase of a project to build a military academy in the best location within the forest, which covers an area of 20 thousand acres. The Jordanian government had decided in 2010 to allow cutting off perennial trees, in violation of the Agriculture Law, which states the following: "to prohibit any destruction or abuse of the forest trees ،rare wildlife and plants threatened from extinction ".
On a private visit we shown the size of uprooting to the forest,
we estimated that the violation reached around two thousand long-lived tree, leaving a large hole in the forest and we learned that the Ministry of Agriculture called for the a fine of two hundred thousand Jordanian dinars instead of working to open a formal investigation to hold people in charge accountable after attacking an environmental heritage.
In my previous role as the regional manager for Greenpeace Arab World i stated that " This attack is against environmental and forests laws in Jordan, and i demanded an official investigation to hunt down attackers and disclosure of their names as Bergesh forest is one of the few green spaces that remained In Jordan, recent statistics indicate that the remaining space has shrunk to only 1%, and therefore must be sought in ways that maintain the survival and to fight against any attack to forests in Jordan". 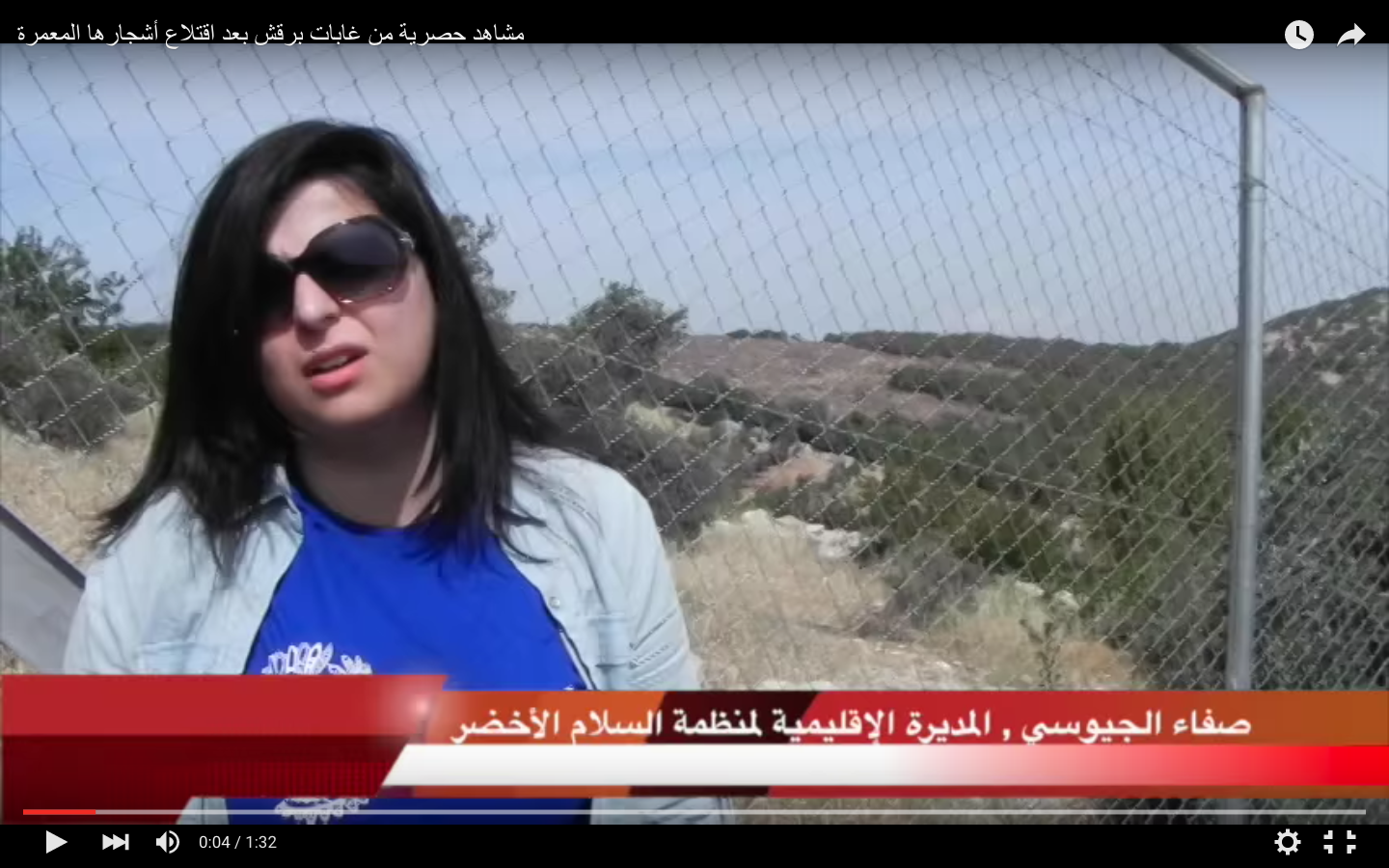 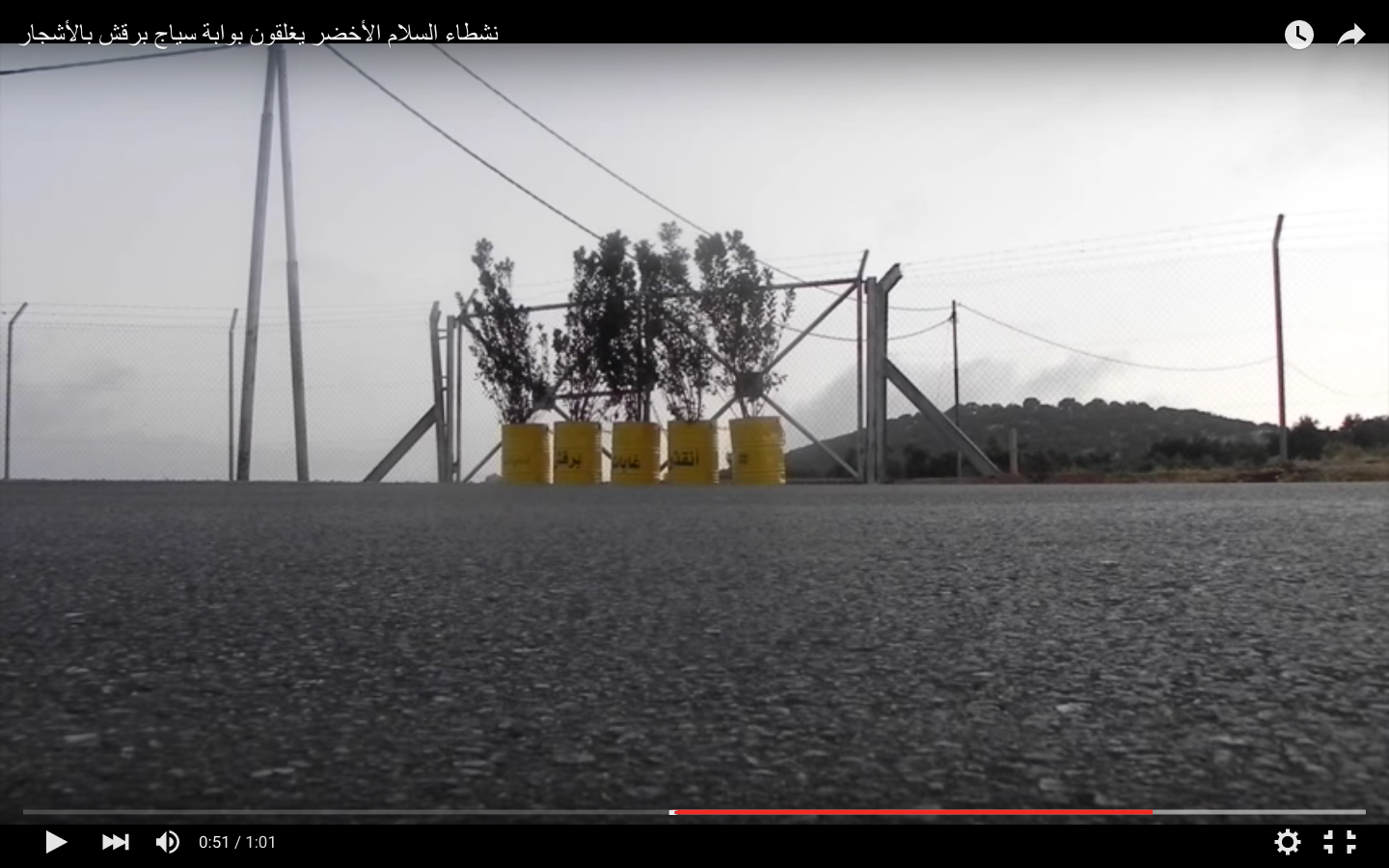 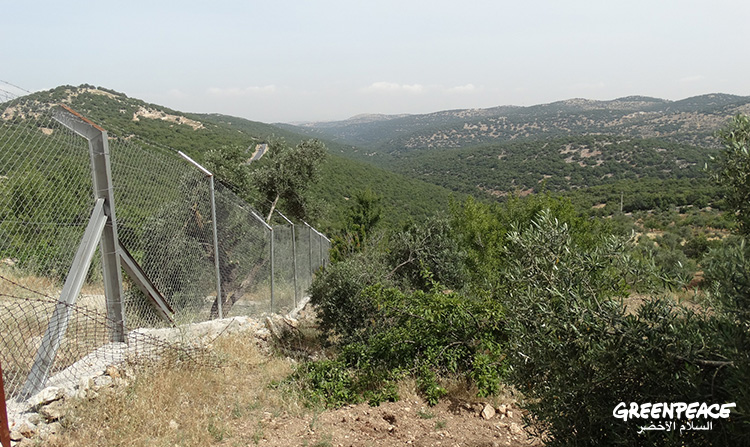 Our Jordan is Not Nuclear Campaign حملة اردننا مش نووي

Through my work as the regional manager for Greenpeace Arab World I organized & implemented “Our Jordan is Not Nuclear” Campaign for 4 years. I organized the very first non violent direct actions in Jordan against the nuclear power plants plans those action were parallel to an advocacy campaign and public mobilization campaign. We were able to collect 30000 votes signatories from Jordan against the nuclear plans, further to that we won the parliamentary vote against it.

Jordan’s nuclear power programme is seriously misconceived on a number of grounds: technology; economics; commercial arrangements; and appropriateness for the Jordanian electricity system.

Mitigation measures for the nuclear power plants won’t save us from natural disasters, human mistakes & terrorists attacks anytime. Nuclear power plant can demolish Jordan and could impact our generation’s health and the health of our children .

Through this campaign I launched a report called “ Jordan’s Energy Future” to showcase the the nuclear plans false solutions and prove that Renewable energy resources - particularly solar - can technically provide sixty times more than Jordan’s electricity consumption in 2050. Here is the english versions of the report Click Here 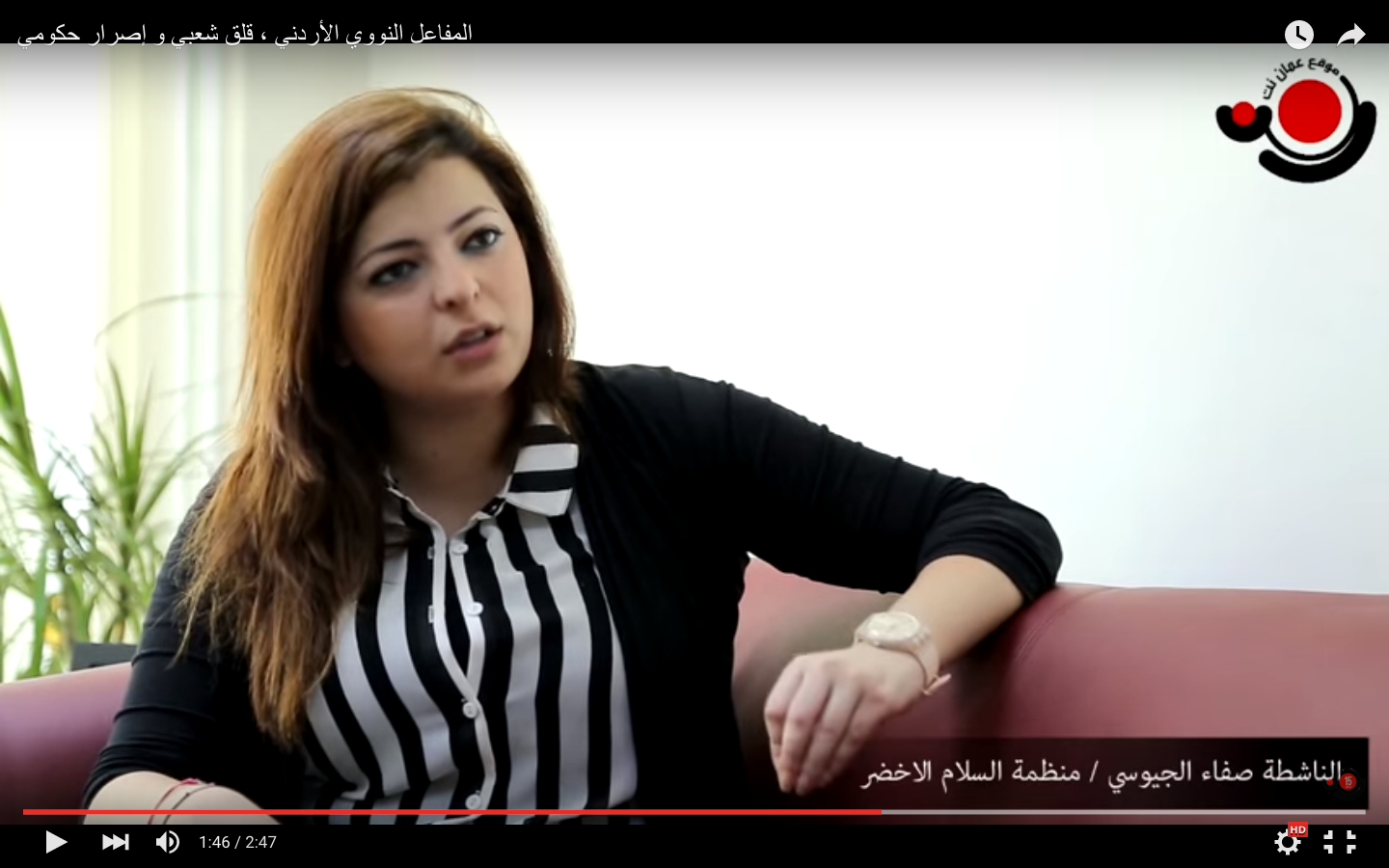